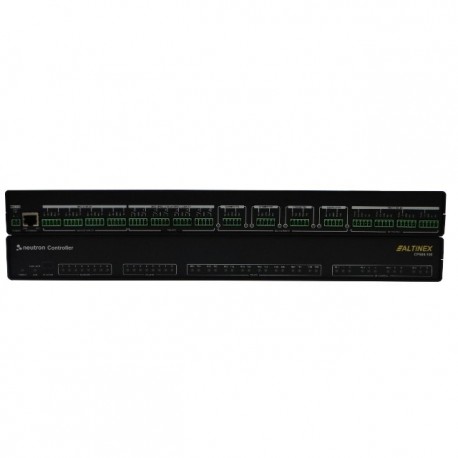 Designed to extend the capabilities of the company’s highly regarded MultiTouch line of touch panels, the Neutron CP500-100 is a rackmountable, 1RU controller that is ideal for use in installations where a sizeable number of components must interact , including large boardrooms and presentation spaces, lecture halls, residential control systems, and operations centers.

The Altinex Neutron CP500-100 Controller offers a 12V DC power terminal block, an RJ-45 Ethernet port and multiple 5-pin terminal blocks—four each for the Sensor inputs, the Relay-based devices, RS-232 devices, and IR control. The Neutron Controller is designed to work with a wide variety of sensors, including motion sensors, IR detectors, AC Power sensors, Video Signal detectors, and RF detectors. The four Sensor inputs accept sensor output voltages up to 24 VDC and each sensor input has an independent trigger level setting that can be used to determine if a sensor has been “tripped” or “activated” based on movement, occupancy, etc.—depending on the sensor type.

The Neutron Controller’s eight relays can be used to control external devices such as a projector screen and can also be used to route power to low power DC devices. The Neutron Controller’s eight bi-directional RS‑232 COM ports are able to communicate with virtually any serial device such as computers and control systems. Each port can be individually set with different baud rates, parity, stop bits, and data bits—enabling a control application to operate different devices from a single remote location through the TCP connection via Ethernet. LED indicators on the rear of the controller show Ethernet activity and verify that the RS-232 has been wired properly.

Supporting three distinct methods for IP control, the Neutron CP500-100 Controller’s IR capabilities are extensive. Using an IR receiver such as the Altinex AC301‑103, an AV system can be created that enables a user to aim a remote control at a wall mount or other receiver and then automatically redirect the remote control’s signal to the IR emitters connected to the two output pins of the controller. Alternately, a computer, controller, or other device can send IR command strings from the Altinex IR library directly to the Neutron Controller using an Altinex MultiTouch panel. Further, IR commands can be stored in the Neutron’s internal memory for the purpose of controlling external devices.

AVSuperstore keeps your credit card information private and secure. We Accept Visa, MasterCard, Discover, American Express and Purchase Orders for qualified customers. We respect your privacy and will never distribute your information to any third party. See our privacy policy for more information.

We ship with UPS, FedEx and major freight carriers at highly discounted rates to ensure you get the fastest shipping at the lowest rates. 5-day ground, 3-day, 2-day or overnight shipping options available.

Our longstanding relationships with our manufacturers allow us to offer you highly competitive prices on all of your favorite A/V brands. In addition, our sales staff are trained and committed to getting you the best deals possible to help you save money whichever way they can.

As a leading retailer of A/V electronics for over 15 years, our trained experts are available to answer any technical questions you might have. If you have any questions regarding a specific product, please give us a call at 1-866-866-6767.

To be determined Shipping
$0.00 Total